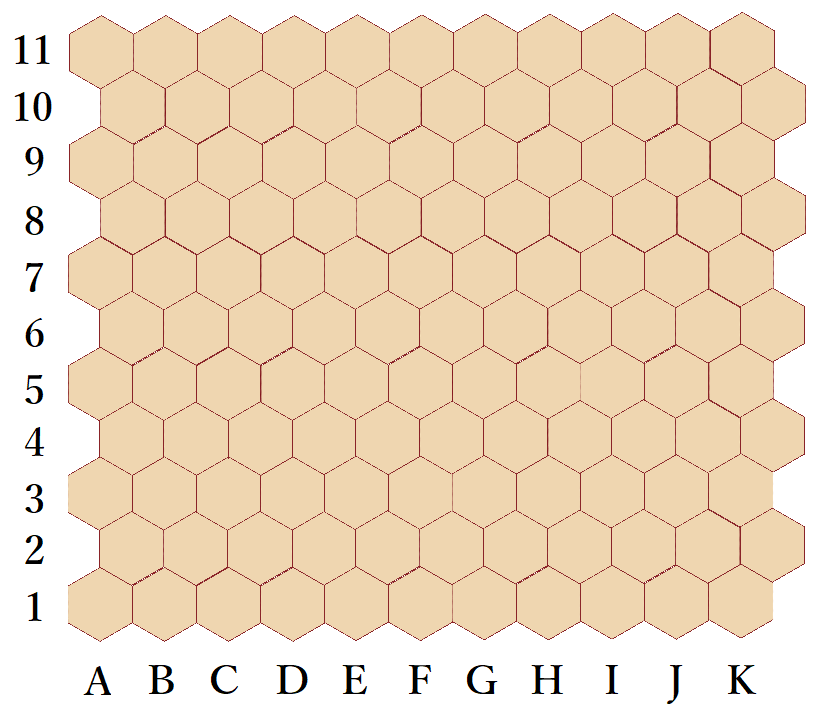 Players have their choice of five cards and one spell card, and a queen card. Cards indicate a type of piece and provide information on it. Pieces are unique in the way they can move and their no summoning zone(explained in next section). Spell cards describe an effect players can induce during the game. Summoning a piece to the board(putting it on the board) requires mp. Players start the game with 200 mp.

Zones are cells on the board with rules on how pieces can interact with them. A piece’s Movement Zone is where it can move(explained in depth in a later section). A piece’s
No Summoning Zone is where your opponent cannot summon a piece in any way. There are no spell cards that circumvent no summoning zones. A piece’s Starting Cell is the cell it occupies at the start of a turn. The Beginning Zone is where players can summon pieces on their first turn.

On both players first turn, they can summon up to 16 pieces in their Beginning Zone only, one of which must be a Queen(one Queen will have no cost during this turn). A player’s Beginning zone is the first three rows closest to them(1-3 for player 1, 9-11 for player 2). Player 1 goes first. During their subsequent turns, a player can either summon a piece anywhere on the board(except their opponent’s No Summoning Zones), move a piece, sacrifice their pieces or use their spell card.

Pieces are captured(taken off the board by an opponent) if an opponent piece moves into the cell it occupies. A player wins if their opponent has no queens on the board. The game is a draw if Queens are the only type of piece which can move on the board.

Movement is similar to chess in that pieces can either “leap” to cells or they have a path of cells. A path is a straight line of cells connecting from a piece’s starting cell. A piece can have up to 6 paths(for each side of its starting cell). If another piece is within a path, you cannot move that piece past the obstruction. Movement cells that are not part of any of a piece’s paths, can be leapt to(placed on) as long as another one of your pieces is not already occupying it(see other rules). In the following examples, green colored cells indicate where that piece can be moved to. The purple cell indicates the starting cell. Letters indicate pieces(see Notation). Take note of which piece belongs to which player(see The Board).

3. Players can use their spell card once per game.

6. Players can only sacrifice exactly 2 pieces during their turn.

7. Both player’s cards must be visible to each other during the game.

8. False Angel has a minimum cost of 1 mp and no maximum.

9. Spell card effects are prioritized over all rules. 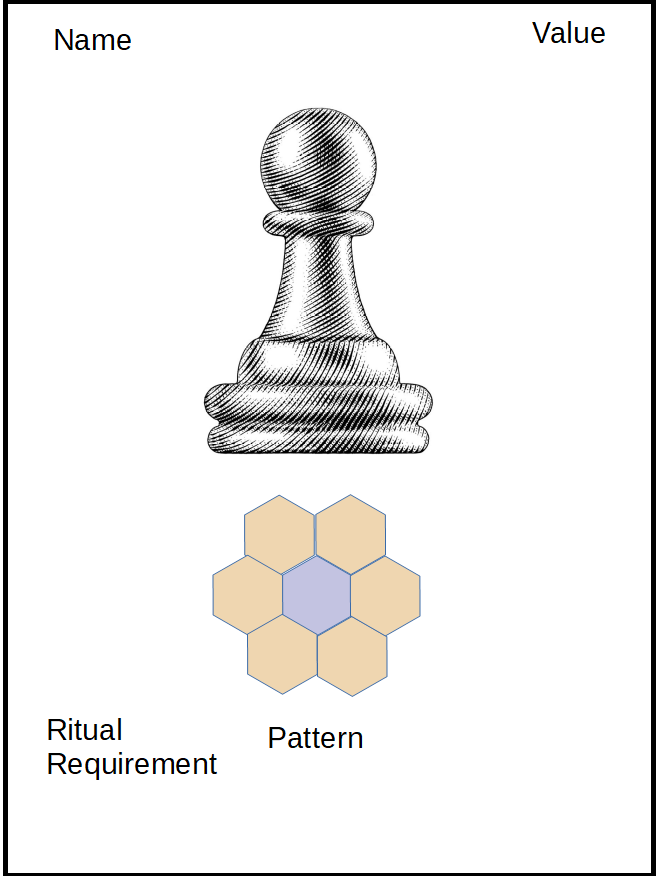 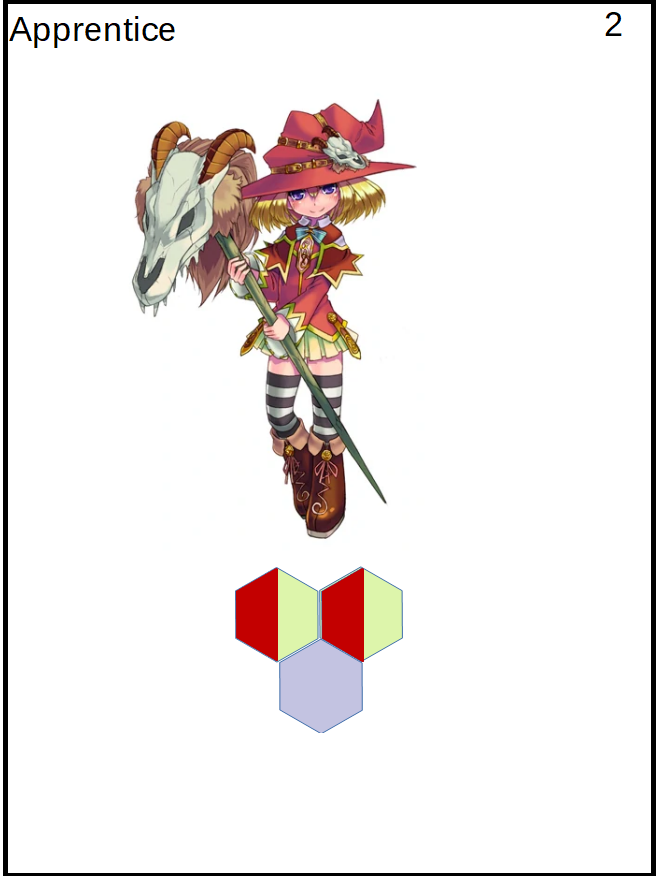 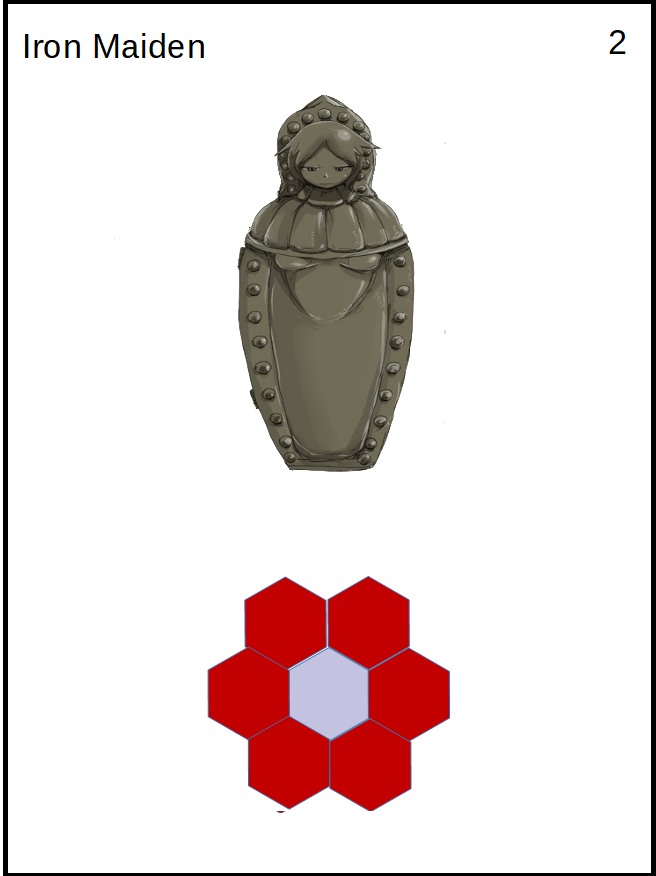 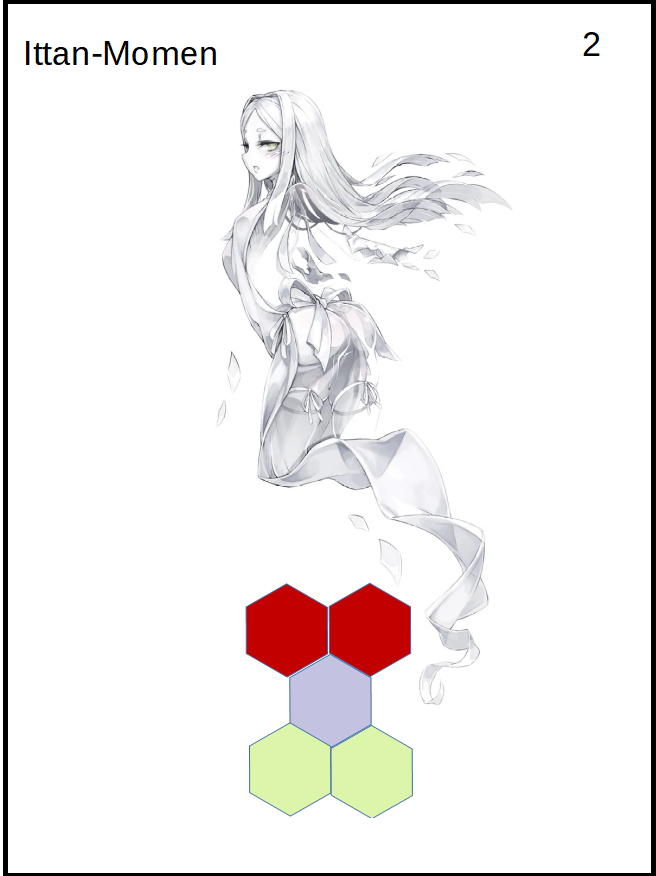 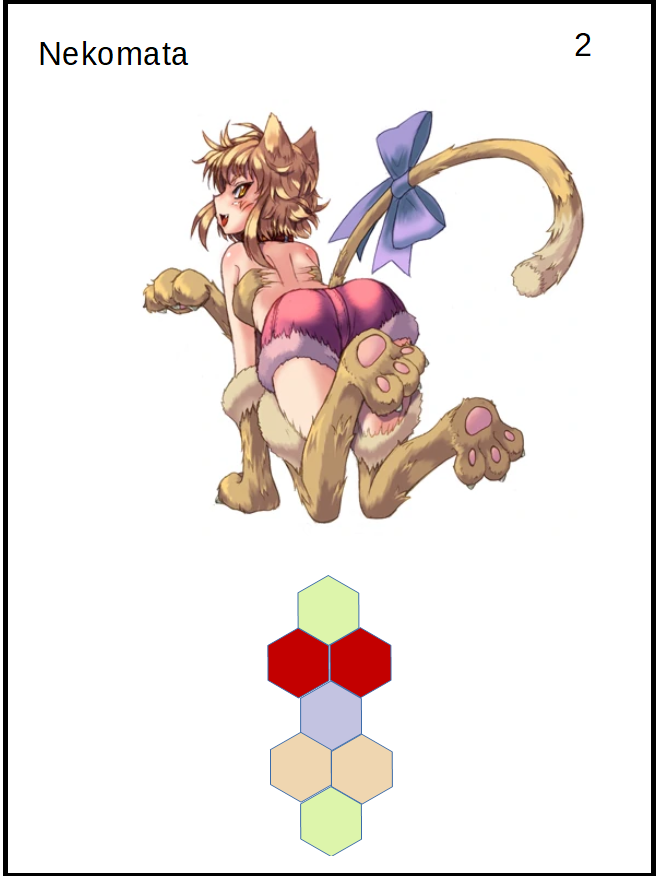 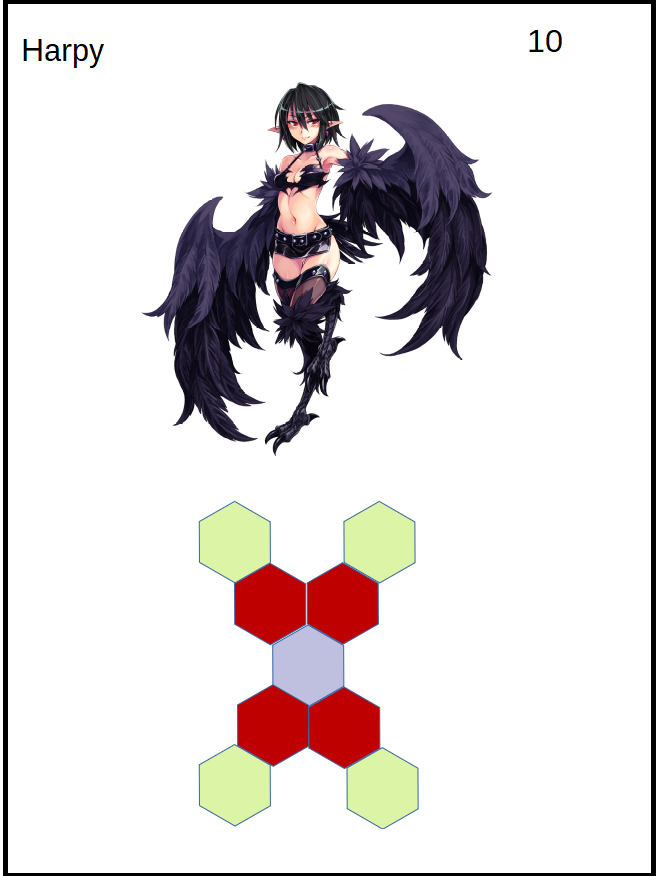 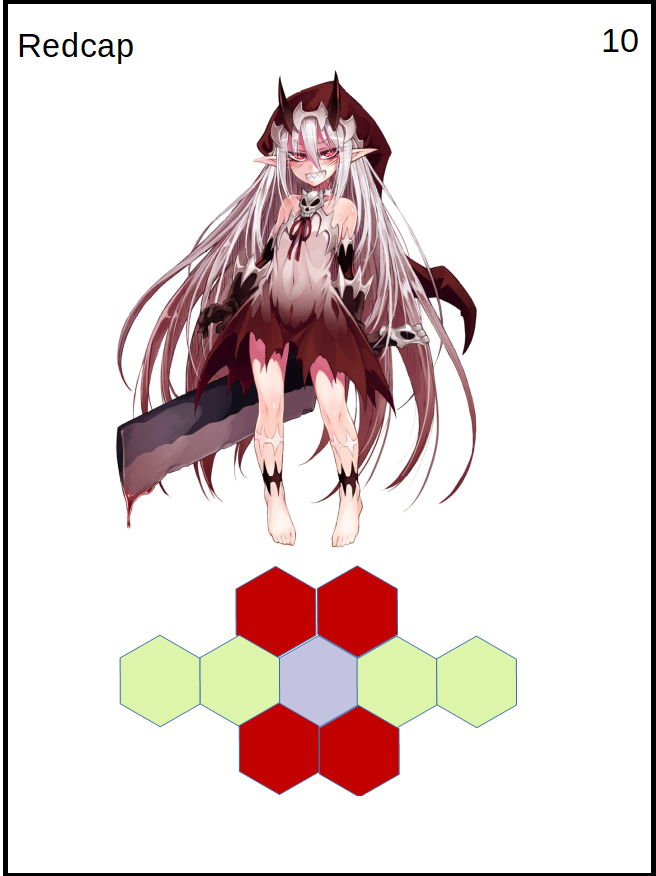 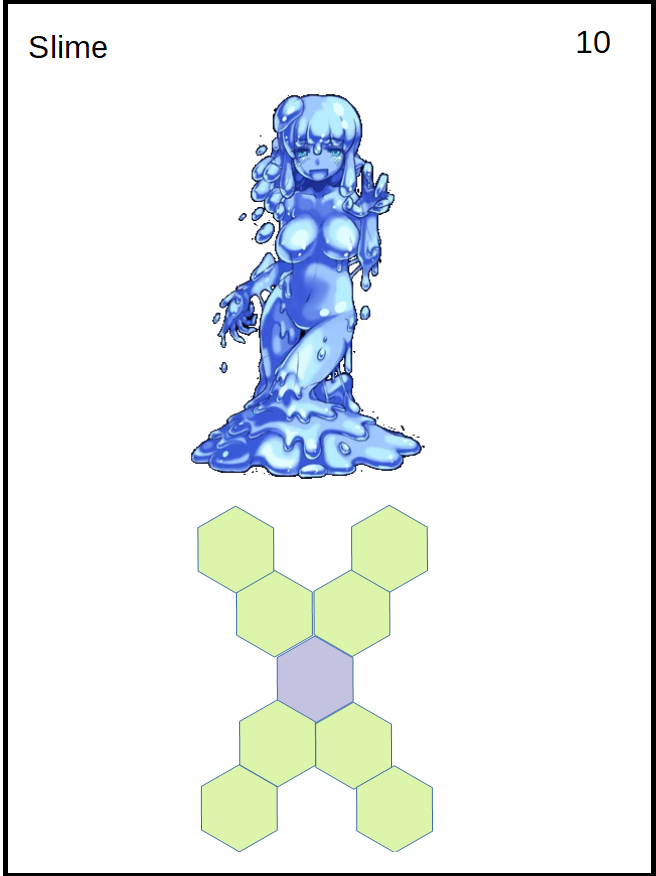 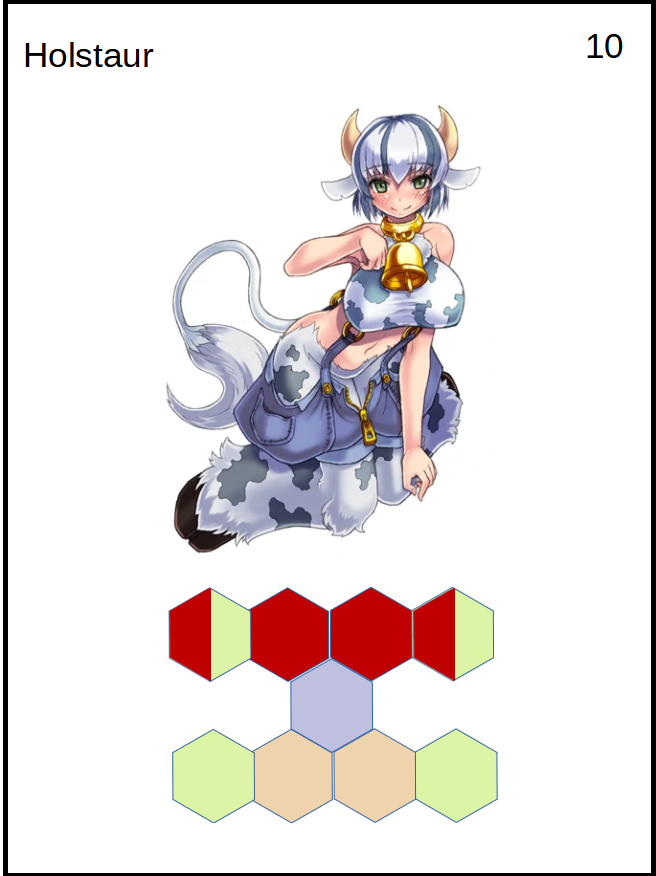 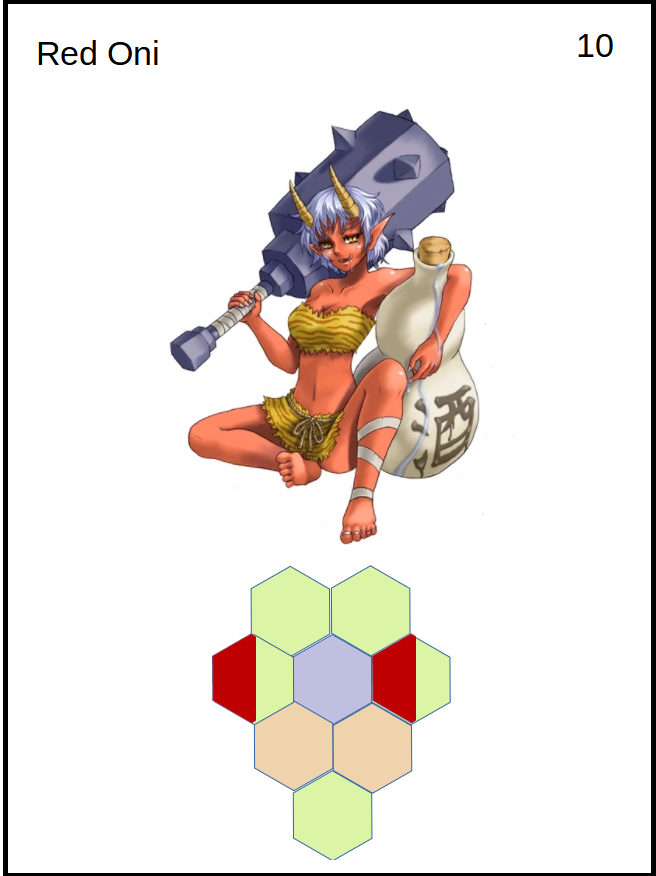 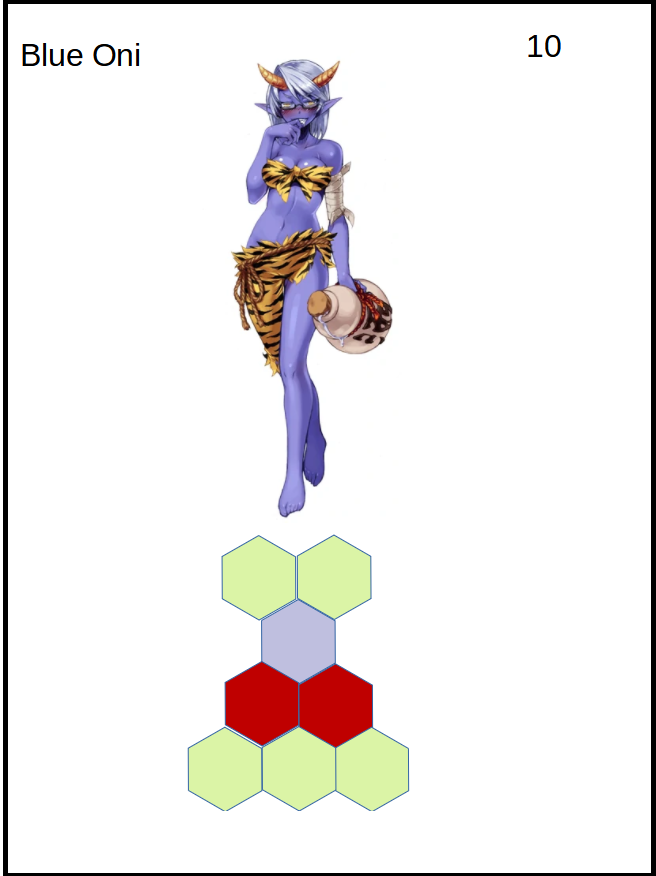 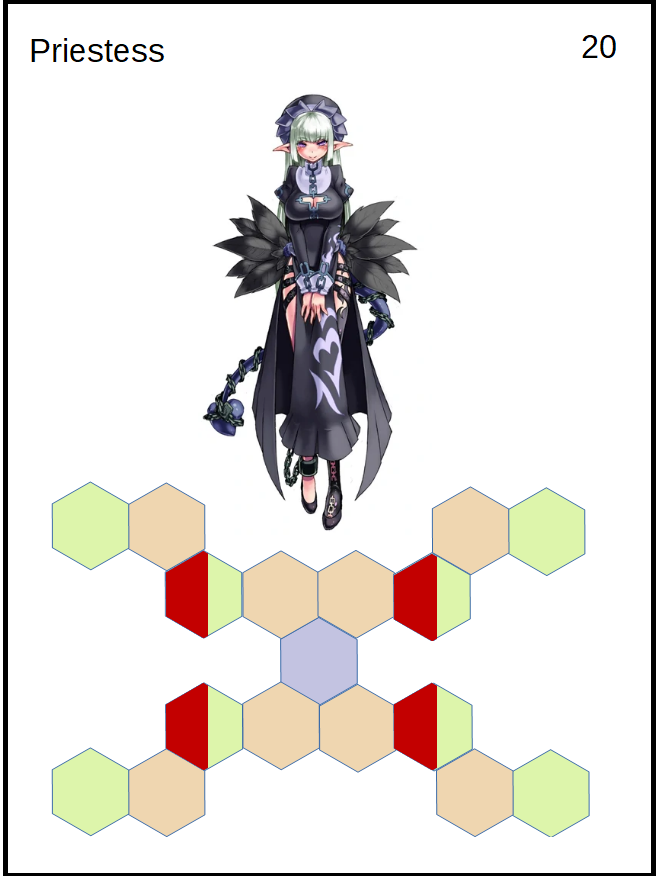 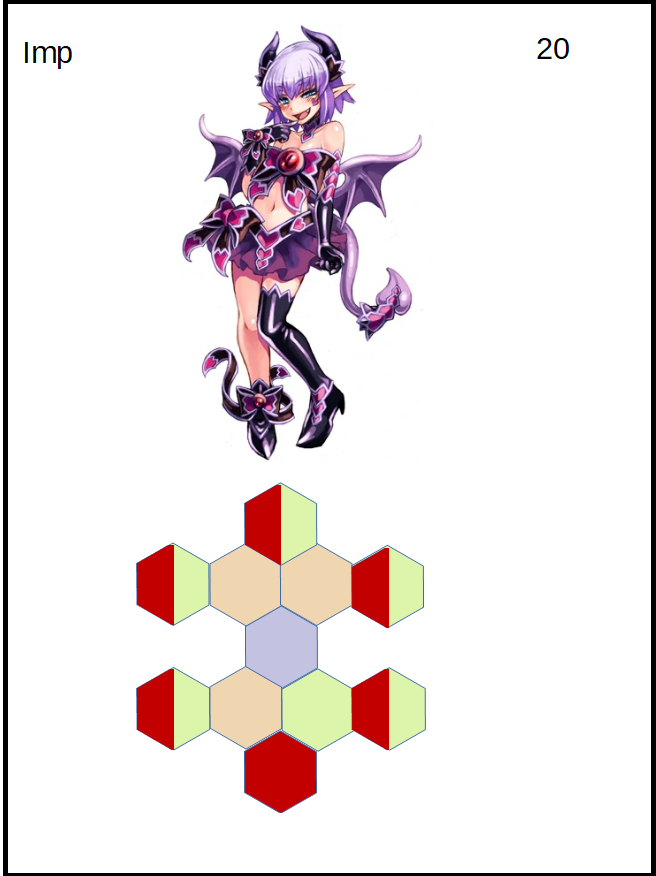 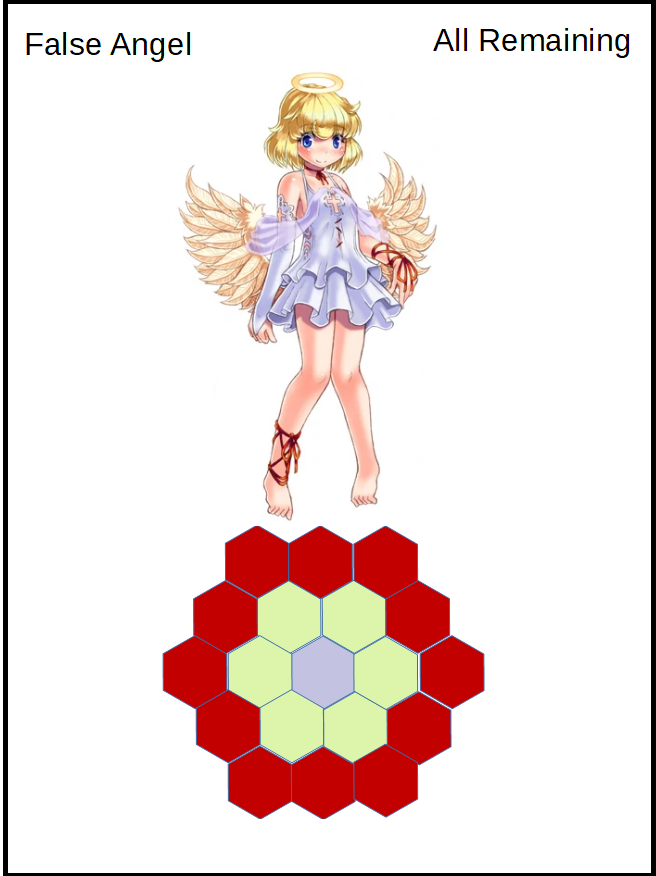 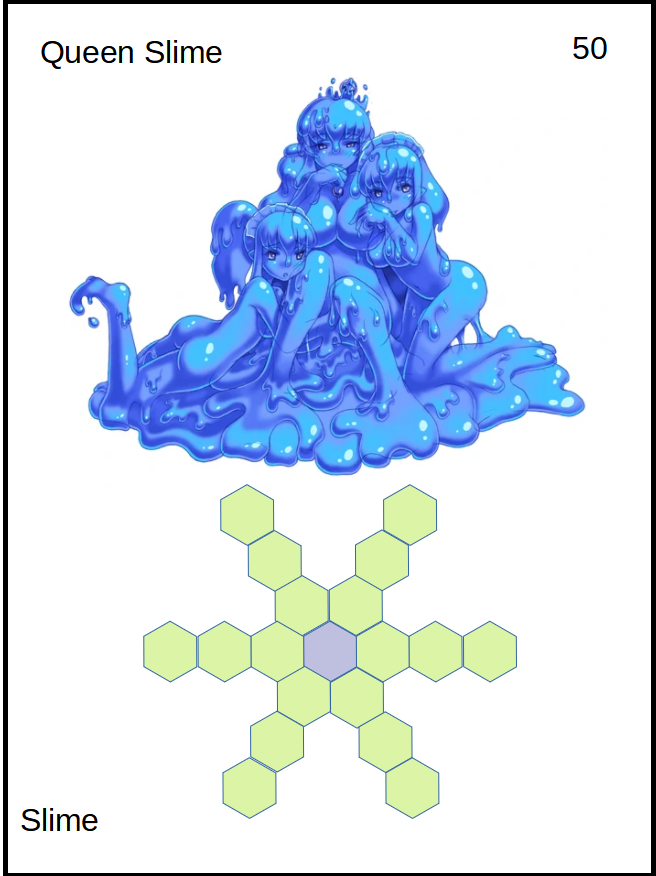 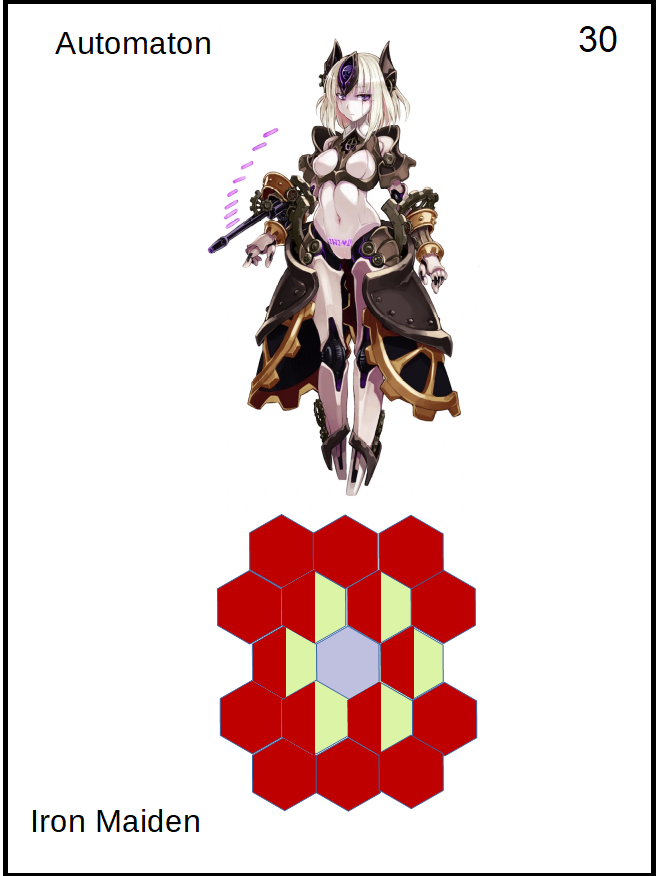 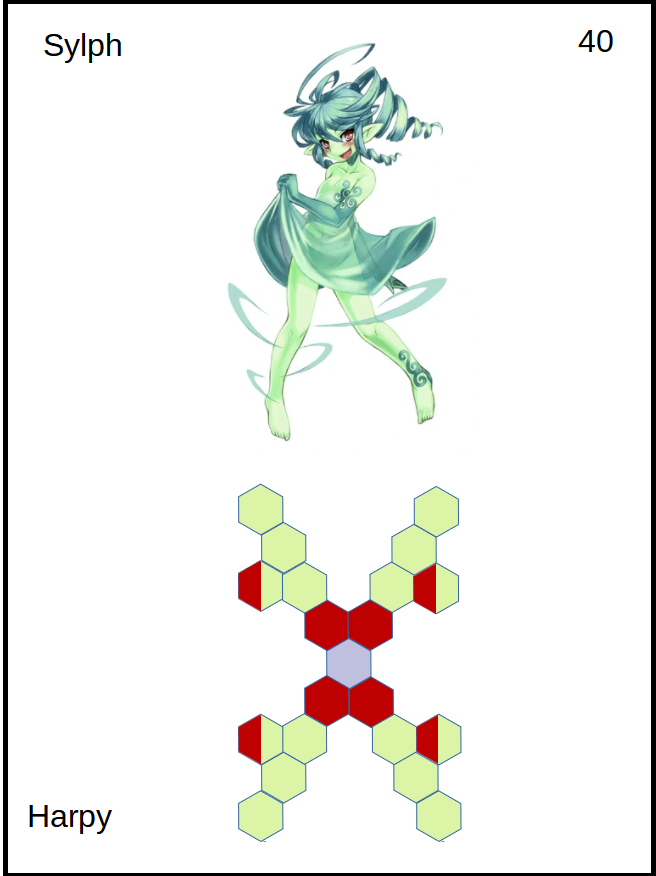 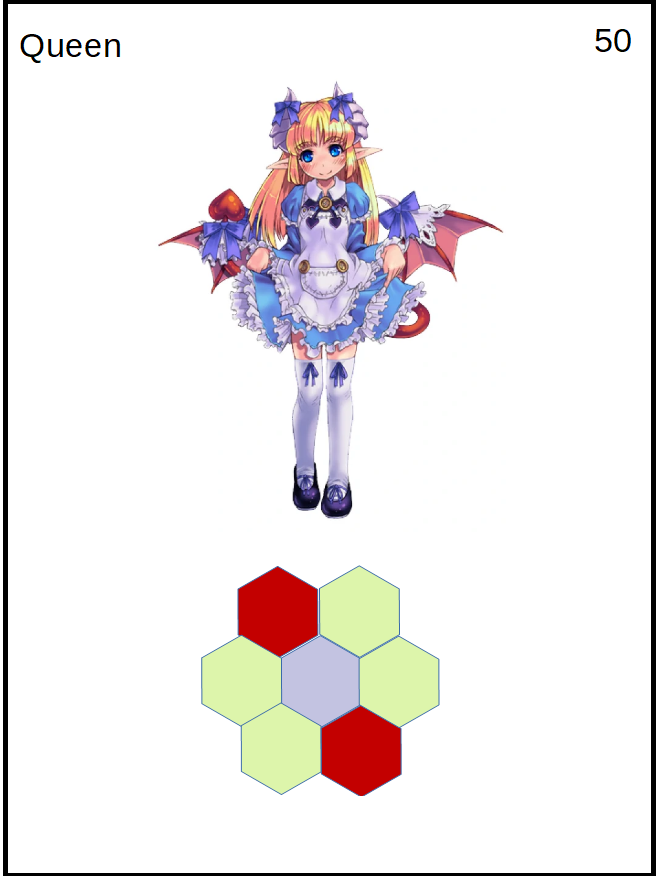 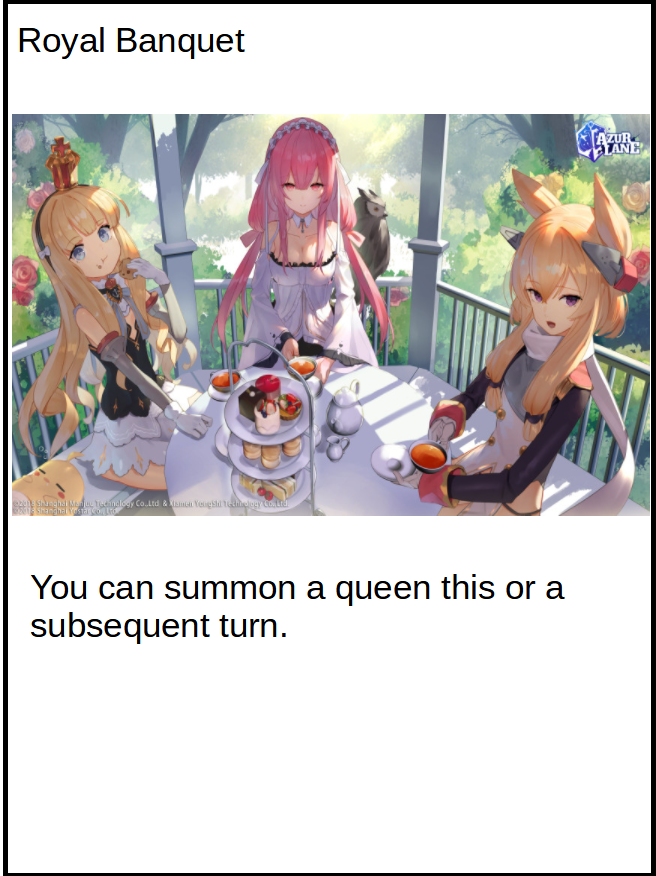 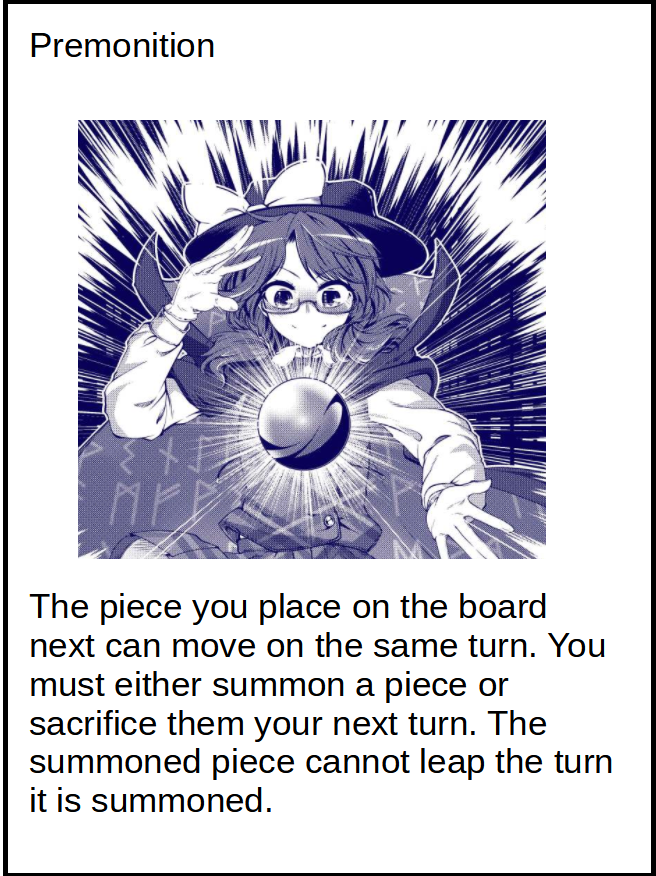 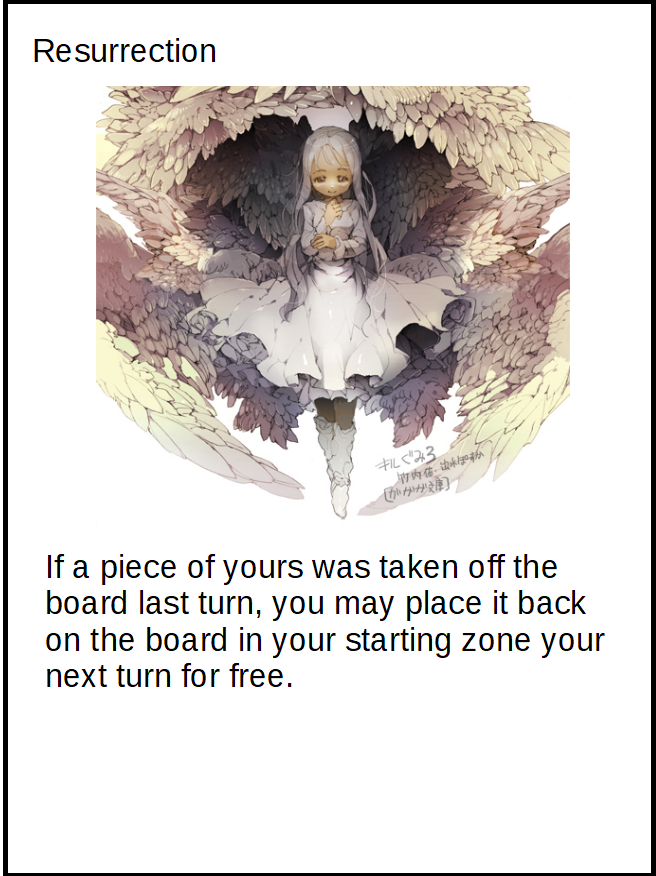 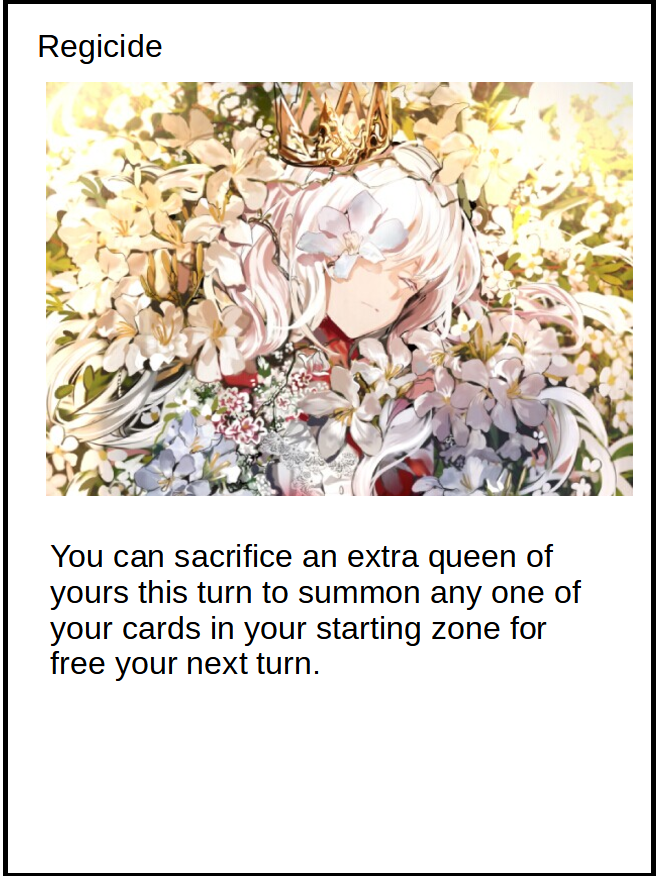 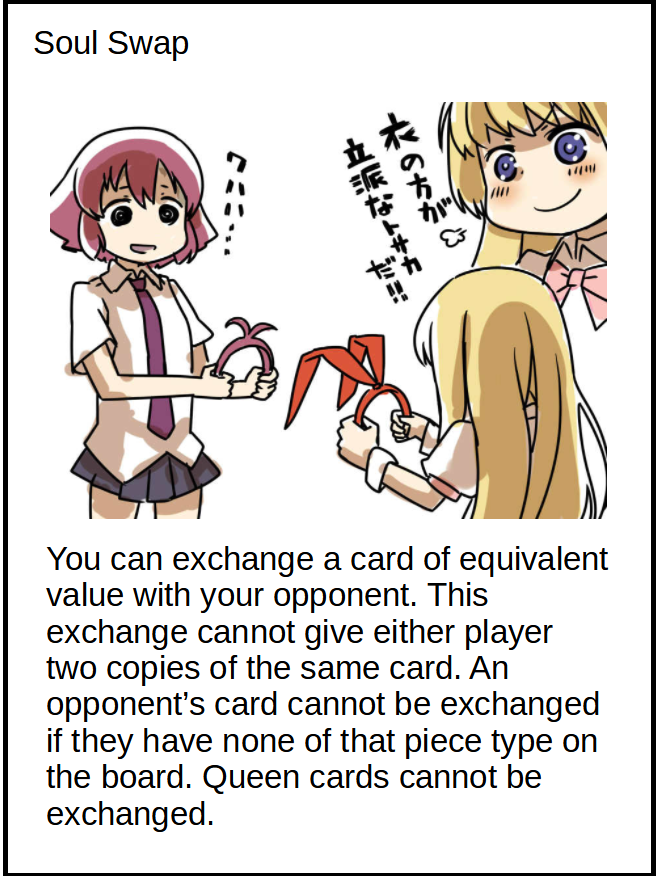 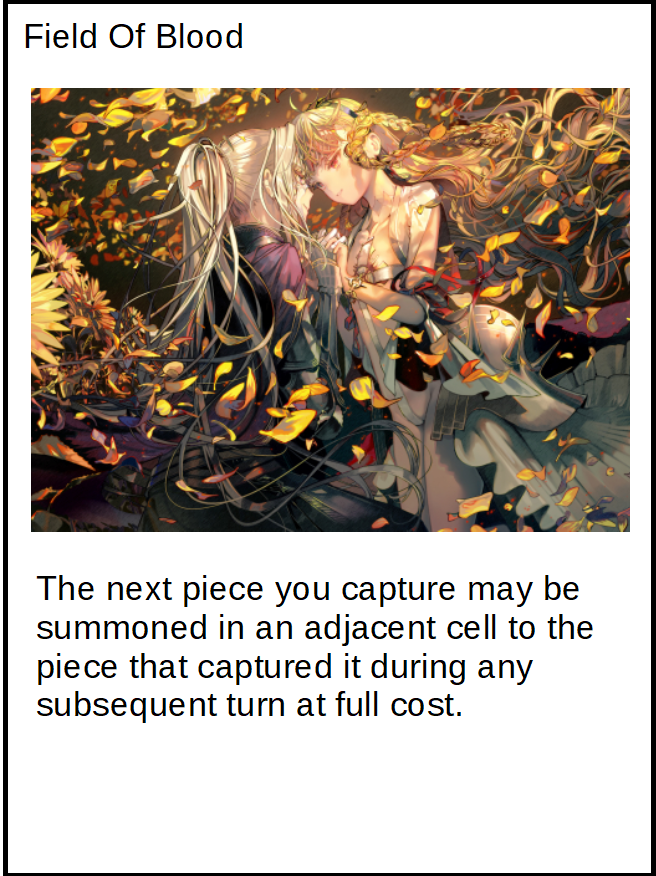 A cell on the board is denoted by a letter and number coordinate. a1 is located on the left corner of the board. Turns are numbered. Pieces are denoted by letters. When multiple actions occur on the same time, those actions are written in the order of occurrence and separated by a comma and space. The remaining mp of a player at the end of their turn is written last following a vertical bar.

This work is licensed under a ShareAlike 1.0 Generic International License.