Setting up a game:

When you first open up the client, nothing is set-up yet. Before a game can start, the client needs to be told both players' decks. This can be done in two ways: the deck editor or notation input.

The Deck button on the top left of the screen has two options, both open up the deck editor. When the editor is open, 7 buttons need to be pressed in total before the confirm button is pressed: 6 for the piece types(one of which must be the Queen) and one for a spell card. After this, the confirm button can be pressed. If the editor was opened by pressed the "P1 Deck" button, pressing the confirm button assigns those choices in player 1's deck and vice versa.


The text box in the editor can also be filled with a nested array like [[0,1,2,3,4,16], 1]. The [0,1,2,3,4,16] part is for the piece types, and the 1] part is for the spell card. Either square brackets or parantheses can be used. If you want to use this text box, you can either press enter or press confirm(if no option buttons have been pressed) after filling it.

After a deck has been selected, two things happen: the notation box diplays the deck just chosen in array format, and when the mouse is brought to the deck button again, a green dot appears next to the button pressed to open the deck editor.

After the deck editor is used to select a deck, something will appear in the notation box. This output can be clicked, and it will be copied to your clipboard. The bottom of the notation box has a text input box. Putting something in there and pressing enter sends the input to be processed.

Putting these two features together, one player can click on their output, send it to another player in whatever way they feel like(irc, email, etc .), and that other player can paste what they received in the notation box's text input. Every player action needed to play the game, including choosing a deck, can be performed in this way.

Because multiple actions can be taken during some turns(such as both players' first one), it's important to note that when somethig is inputted this way during a game, it is assumed those are the only actions a player wants to take during their turn. So in these cases, wait until your turn has ended before sending the output, so it can be used as one input by the other player.

After selecting the New option, a dialog will appear requesting a preferred board orientation. By default, the board has player 1's perspective. Pressing p2 switches to player 2's perspective and vice versa. Closing this dialog starts the game.

Like every other in-game player action, summoning can be performed via notation input. Because of the way notation input works, if it is used on a player's first turn and they fail to summon a Queen(according to the input), they will lose the game right then and there.

Demonstrated here is a draw. Both players did in fact perform their turn correctly, but they also reached the conditions needed for a draw.

If both player's perform their first turn correctly, the rest of the game can ensue and all player actions become accessible.

Summoning is performed in the same way as on the first turn(except the whole board is accessible now). To move a piece, it is simply dragged to a green cell. Pieces can be moved preemptively, meaning if it is dragged to a green cell while it is not their owner's turn, it will immediately move there when it becomes their owner's turn. To cancel a preemptive movement, drag and drop the piece in its starting cell. To use a spell, press alt space during your turn. 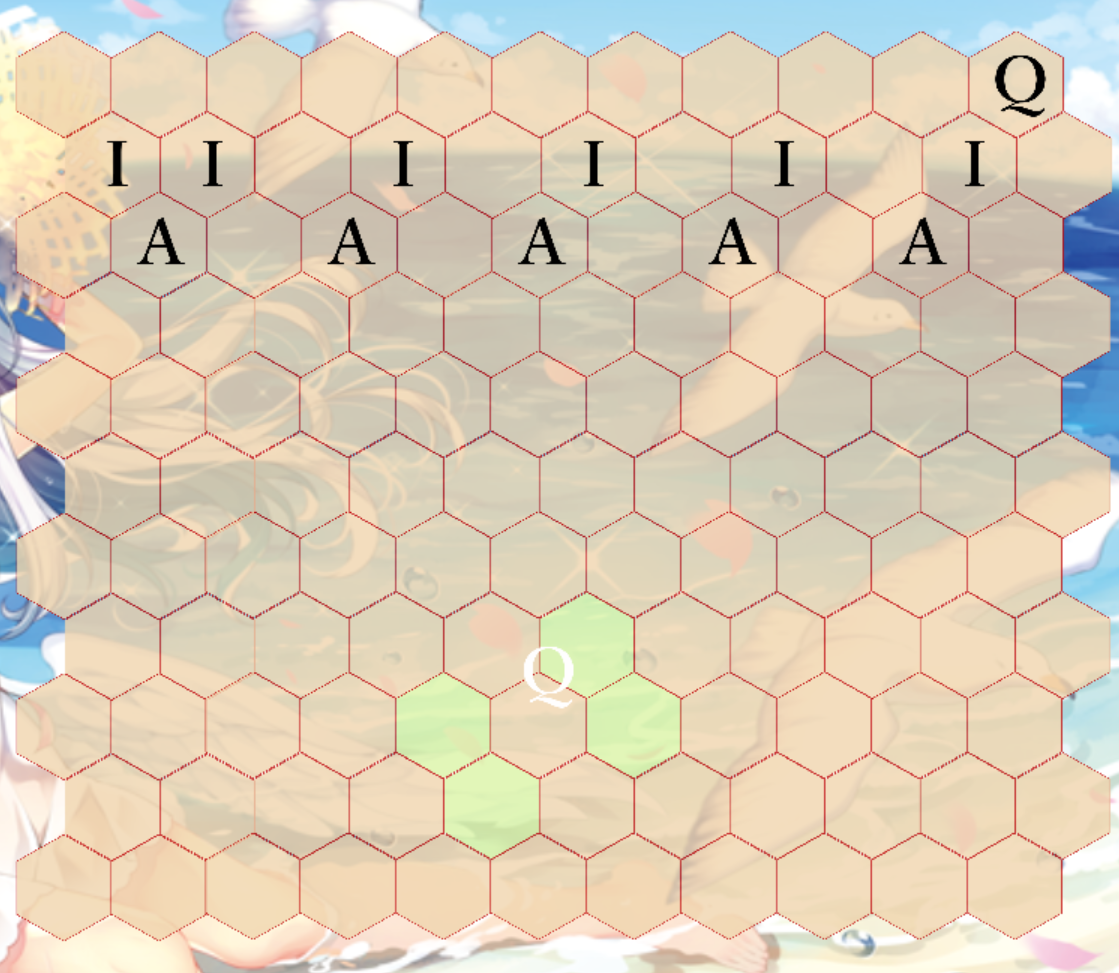 Other useful functions, like how to see players' No Summoning Zone or deck, are described in the keyboard shortcut document included with the client. These aren't really shortcuts because there's no other way to perform these actions, but I don't feel like renaming it.

To end a game before a draw or one player wins, the Forfeit button under the Game options can be used. When a game ends in this or any other way, the player decks are retained and don't need to be chosen again. They can either be kept or changed before another game.